Editor’s note—Look for a bunch of narratives coming up quickly as we update our TLS site.  There are roughly 20 new ones on their way. 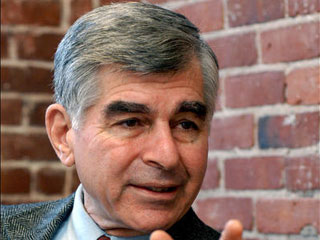 For Mike Dukakis, the 2012 election was one of the happiest in his life, and that includes a number of successful campaigns on his own behalf.  Pleased as he was, he was certain that it would be a close night. Over the years, be it in state or national races, Democrats found ways to let leads slip away in the 11th hour.  In 1968, Nixon would have lost had the race taken place 48 hours later. In 1976, Carter almost lost the race after building up a 34 point lead at convention.

The 2012 election provided a double-win with Elizabeth Warren for the Senate and Barack Obama meant a victory for grass roots politics, something that Mike Dukakis has preached since he began his entire political career as a Selectman from Brookline.

Mike Dukakis joins us on several occasions each year, with an early January meeting in Los Angeles and a San Francisco gathering in late February to coincide with his granddaughter’s birthday. The three-time Massachusetts Governor and 1988 Presidential nominee notes that the Obama team learned from their mistakes and missteps in 2010 midterms and came roaring back to win.

The economy is still a long way from its full cylinder strength of the late 1990’s.  We are coming out of the worst economic mess since the Great Depression.  Worse for Obama, the collapse took place only months before he won the presidency in 2008, as opposed to Herbert Hoover, whose economic collapse took place early in his term.

Being the first African-American President at a time of economic instability, where members of the opposition did not even both to hide the polite bigotry of code words only made things worse.   In short order Obama, restructured the auto industry, engineered draw-downs in both Afghanistan and Iraq, engineered a risky take-down of Osama bin Laden, passed healthcare reform, and doubled the stock market.  Had any Republican accomplished that, they would be chiseling out his profile on the side of Mt Rushmore.

Way back before 2007 became 2008, there was a palpable excitement about where an Obama candidacy could take the country.  For some he was an African-American Kennedy, for others, he was the logical extension of Martin Luther King, Jr.  Before he spoke before the 2004 Democratic Convention in Boston, he was a nobody, an obscure Illinois Senate candidate who was essentially unknown outside of Chicago and Springfield.  Yet in only a few months’ time, he outlasted Hillary Clinton for the nomination. On Election Night 2008, as Oprah Winfrey cried on the shoulder of Luncheon Society member Sam Perry, the significance of how far we had come as a nation was laid bare for the world to see.

However as Dukakis had pointed out, Rahm Emmanuel’s hard work of building a Democratic majority in 2006 was undone because the Obama voter in 2008 failed to show up at the polls for the mid-term elections.  Moderate Democrats who won four years earlier became “easy-pickings” for emerging Tea Party candidates. Hard won congressional swing districts went Republican and Democrats were especially hard-hit in Midwest states.  Whatever excitement Obama had in 2008 melted away and he had the makings of a one term president.

In many respects, it was a replay of the Clinton first term, but least the former president had a strengthening economy at his back as he got closer to 1996.  With Obama things only got worse in 2009and 2010.  Worse, with expectations so high for Obama, the fact that the economy was not only solid ground by the end of his first day as president was somehow held against him.

As 2012 election loomed on the corner, it appeared in certain circles that Obama was finished.

However, there are times when dire circumstances bring inspiration that pays off in the long term.  As they geared up for 2012 they brought Big Data to their game.  In a political environment where partisan labels have declined and been replaced by “Decline to State,” the Obama team identified their targeted votes by looking through a number of consumer behaviors.  Once the model had been established, it all came down to outreach, especially in those swing states.

Like John Housemann once said for Smith Barney’s a generation earlier, The Obama team won the old fashions way….they earned it. While the Obama team did not have the economy at their back, they did have the changing face of America’s demography in their favor.  In fact, if you look back at how African Americans, Hispanics and Asian voted in 1988, it was overwhelmingly for Mike Dukakis over George HW Bush.  However, back in 1988 these groups only represented a 15% of voters nationally. In 2012 this group had doubled to nearly 28%, all with strong Democratic numbers.

Rerunning the 1988 election with higher participation from Hispanics, Asian and African American voters and the lower participation of white voters would have led to a narrow Dukakis triumph. Likewise had Obama takem his number back in time to run in 1988, he would have been thumped.

The upside is that Mitt Romney served as a foil for Obama, who changed his stripes from a liberal Senate candidate against Ted Kennedy in 1994, to a moderate-liberal one term Governor of Massachusetts, and then to reborn as a Reagan conservative for his two White House runs.  Ronald Reagan kept the same stripes and waited for the country to warm up to him could shape shift so often that some wondered if he had any core beliefs.  In the end, Mitt Romney wanted the Republican nomination in the worst way—and he got it.

It is hard to believe that Romney thought he had the race won.  His behavior in the last 48 hours perplexed many—he was a candidate who was trying to expand his “victory.”  In a conversation with Paul Ryan, they discussed whether or not he should resign from the House to begin his work as Vice President-elect. Romney ran a campaign that would have served him better in 1992 or 1988 and will spend the rest of his life wondered what the hell went wrong.   Perhaps he might be able to run beyond his 47% comment, but it remains doubtful.

What Obama did was to rewrite the rules for how Presidential campaigns are won in this 49-49% country.  By carefully identifying their voters, they pursued them relentlessly, especially within those swing states.  With the Tea Party taking the Party rightward, there were vast numbers of moderate voters who would easily vote Republican but were turned off by their emerging stridency. In the end, it came down to a superior retail effort of getting out the vote and Obama outclassed Romney.

For Dukakis, the question now turns to 2014. Will the problems of the Obamacare rollout become long -forgotten memories? Will Democrats be able to build upon their gains from the 2012?  Will the Obama campaign be able to localize the big data triumphs so that state and local candidates can win as well?

At the end of the day, as Dukakis relates, it comes down to the most basic of elements.  When you run, the question he will always ask is “how many precincts do you have?”  Each precinct should have 8 block captains, people who actually live in the neighborhood.  Those block captains will roll up to a precinct leader, and those precinct people will further roll up to a regional leader.

That, Mike Dukakis will tell you directly, is how you win elections.