“O’Brien’s prose reverberates with fiery crashes, then stings with the tragedy of lives lost in the cockpit and sometimes, equally heartbreaking, on the ground.” —New York Times Book Review

One of Time Magazine’s Best Books of the Summer

In 1928, less than a dozen American women had a government-issued pilot’s license, making the few women who flew planes true radicals. Fly Girls tells that story, their story—the story of women fighting for the right to fly airplanes, winning the right to race them, and then beating the men in one of the most dangerous air races of them all. It was, for the female pilots, a stunning upset and one that proved what the women had known all along: They were just as good as the male pilots, maybe better. They belonged.

Between the world wars, no sport was more popular, or more dangerous, than airplane racing. Thousands of fans flocked to multi‑day events, and cities vied with one another to host them. The pilots themselves were hailed as dashing heroes who cheerfully stared death in the face. Well, the men were hailed. Female pilots were more often ridiculed than praised for what the press portrayed as silly efforts to horn in on a manly, and deadly, pursuit. Fly Girls recounts how a cadre of women banded together to break the original glass ceiling: the entrenched prejudice that conspired to keep them out of the sky.

END_OF_DOCUMENT_TOKEN_TO_BE_REPLACED 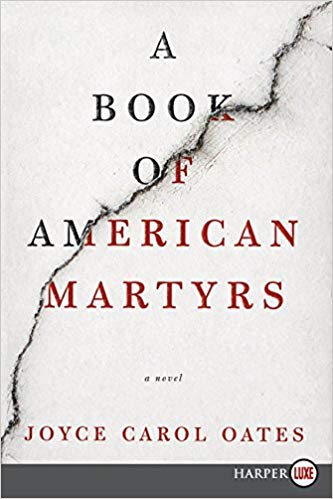 In this striking, enormously affecting novel, Joyce Carol Oates tells the story of two very different and yet intimately linked American families. Luther Dunphy is an ardent Evangelical who envisions himself as acting out God’s will when he assassinates an abortion provider in his small Ohio town while Augustus Voorhees, the idealistic but self-regarding doctor who is killed, leaves behind a wife and children scarred and embittered by grief.

In her moving, insightful portrait, Joyce Carol Oates fully inhabits the perspectives of two interwoven families whose destinies are defined by their warring convictions and squarely-but with great empathy-confronts an intractable, abiding rift in American society.

A Book of American Martyrs is a stunning, timely depiction of an issue hotly debated on a national stage but which makes itself felt most lastingly in communities torn apart by violence and hatred.

END_OF_DOCUMENT_TOKEN_TO_BE_REPLACED

From the host of MSNBC’s The Last Word with Lawrence O’Donnell, an important and enthralling new account of the presidential election that changed everything, the race that created American politics as we know it today

From the Book Jacket: The 1968 U.S. Presidential election was the young Lawrence O’Donnell’s political awakening, and in the decades since it has remained one of his abiding fascinations.  For years he has deployed one of America’s shrewdest political minds to understanding its dynamics, not just because it is fascinating in itself, but because in it is contained the essence of what makes America different, and how we got to where we are now. Playing With Fire represents O’Donnell’s master class in American electioneering, embedded in the epic human drama of a system, and a country, coming apart at the seams in real time.