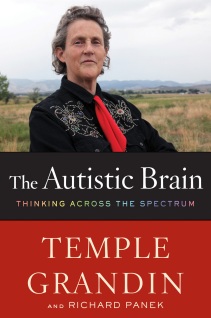 This is the fourth time that Dr. Temple Grandin has joined The Luncheon Society.  She joined us three times in San Francisco and one time down in Los Angeles.  The LA gathering took place in a steak house and she noted, “I better have the steak—after all, it’s the industry I support.”

The first time that Dr. Grandin joined us, it was still several years before Claire Danes portrayed her in the self-titled HBO movie. She was known within autism circles as well as the beef industry—where she redesigned cattle chutes for a more humane approach for processing.  She had given an interview on NPR’s Fresh Air with Terry Gross that was so enthralling that I pulled the car to the side of the freeway to listen to it.  I think I arrived late an appointment and blamed it on an imaginary accident.

How does somebody on the spectrum think?  She explained the difference this way.  She would say, “Close your eyes and imagine a church steeple in your mind.”  As we closed our eyes, we all pictured a singular steeple merged from all of the churches we’ve ever seen.

However, for an autistic person, hundreds of mental pictures might occur.  Dr. Grandin would say, “it’s like Google Images—that is how somebody with autism thinks. Not wrong, but different.”      END_OF_DOCUMENT_TOKEN_TO_BE_REPLACED

Note—we are now catching up as we rebuild the website.

No argument lights up talk-radio like either side of the Second Amendment.  As mass shootings take place with a gruesome alacrity, we refight the same fight—as if we are arguing in place—over what is constitutional and what is not.

The book itself follows the Heller case (District of Columbia vs. Heller), which wandered up the appellate route and became a high-profile case that was argued in 2008. What does the Second Amendment mean—does it mean when the founders said, “A well-regulated militia, being necessary to the security of a free state, the right of the people to keep and bear arms, shall not be infringed.

Consider the case of Dick Heller, who was a security guard who lived in a rougher part of the District of Columbia. He could carry a gun at work but was unable to get a permit at home. He wanted to carry a gun at home for his own protection.

As court cases go, the holding contoured along the conservative tilt of the Bush II year, with both Roberts and Alito giving the additional push to get to the 5-4 decision.  The case was hatched out of the conservative/libertarian Cato Institute and it gained traction.  When the final holding emerged from the Supreme Court, they ruled, “The Second Amendment guarantees an individual’s right to possess a firearm unconnected with service in a militia, and to use that arm for traditionally lawful purposes, such as self-defense within the home. United States Court of Appeals for the District of Columbia Circuit affirmed.”

END_OF_DOCUMENT_TOKEN_TO_BE_REPLACED

“My concern is not whether God is on our side; my greatest concern is to be on God’s side.”–Abraham Lincoln

Lincoln led America through one of the most tumultuous times in our nation’s history. Reading his words today, it is clear we still have much to learn concerning what it means to be on God’s side.

Bestselling author, public theologian, and leading liberal Christian activist Jim Wallis speaks directly into our current context, revealing the spiritual compass we need to effect lasting change in our society. He explains how the good news of Jesus transforms not only our individual lives but also our public lives. Jesus’s gospel of the kingdom of God helps us recover a personal and social commitment to the common good and shows us–in concrete ways–how to be both personally responsible and socially just. Working together, we can reshape our churches, society, politics, and economy.

In the midst of contentious national debates on gun control, immigration, budget deficits, and more, this book moves the conversations beyond current media and political warfare to bring together a divided country. Wallis explores how Jesus’s agenda can serve the common good, what it takes to sustain a lifelong commitment to social justice, and how reading the Bible as well as the culture can shape our lives for genuine transformation.