The Luncheon Society expands to Boston

Starting this June, The Luncheon Society will add a fourth city alongside San Francisco, Los Angeles, and Manhattan—it will be Boston.

The Boston contingent will begin slowly in 2011 and pick up speed as we move into 2012.  The city may be new but the founding principles forged from that first Luncheon Society gathering in 1997 are still the same, when it was just Tom Koch, Tim Farley and myself.

What we are about. We believe in the relationship between great conversation and good citizenship. And so do you.

So here is my question:  Do you have a friend who might want to join The Luncheon Society in Boston?  Here is what you can do.

As we move into the future, I will be sharing the moderating duties.  In Boston, I will be working closely with my old friend Rucker Alex. She joined us often when she lived in San Francisco but left for the East Coast several years ago.  She is a great moderator and one smart individual.  As for me, I will return now and then for some Boston gatherings.

It also means that I can catch the Sox at Fenway.  Everybody wins.

Our first Boston gathering: We will be meeting with Mike and Kitty Dukakis in early June. Invitations will be sent out soon.

For more information, please reach out Bob McBarton at bob.mcbarton@comcast.net

The Luncheon Society ™ is a series of private luncheons and dinners that take place inSan Francisco, Los Angeles, Manhattan, and now Boston.  We essentially split the costs of gathering and we meet in groups of 20-25 people. Discussions center on politics, art, science, film, culture, and whatever else is on our mind. Think of us as “Adult Drop in Daycare.” We’ve been around since 1997 and we’re purposely understated. These gatherings takes place around a large table, where you interact with the main guest and conversation becomes end result.  There are no rules, very little structure, and the gatherings happen when they happen. Join us when you can. 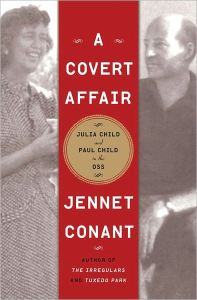 Before Julia Child became the eponymous French Chef and the mainstay of PBS cooking shows, she was merely Julia, a large woman in search of an equally large destiny.

Best selling author Jennet Conant joined The Luncheon Society in San Franciscoand Los Angeles for a dinner conversation about her latest book, A Covert Affair Julia Child and Paul Child in the OSS.  In it, Jennet discussed their World War II adventures but also took both Paul and Julia Child through the stain of McCarthyism, where they and their friends found their loyalty questioned and careers ruined. Through it all, The Childs demonstrated a great deal of courage under a constant barrage of duress.

Conant has written prodigiously about the Second World War. The first, “Tuxedo Park: A Wall Street Tycoon and the Secret Palace of Science That Changed the Course of World War II,” focused on financier Alfred Loomis and a collection of scientists that created the first radar systems and began work on the first atomic bomb. Her follow up, “109 East Palace: Robert Oppenheimer and the Secret City of Los Alamos,” dove deep into how the partnership between Leslie Groves and Robert Oppenheimer built the first nuclear weapon at the secretLos Alamos facility.  In her third book, “The Irregulars: Roald Dahl and the British Spy Ring in Wartime Washington,” Conant followed the intelligence efforts of Roald Dahl, David Ogilvy, and Ian Fleming as they fought the Nazis and broke hearts in the nation’s capitol during wartime.

In all three cases, Conant had a family connection.  Her grandfather, former Harvard President James Conant, played a high profile role in The Manhattan Project. While growing up, she often found herself at her grandfather’s house with a number of Manhattan Project alumni. For example, George Kistiakowsky, who built the first nuclear triggers, taught her how to sail.

A Life Not Yet Realized. While heard to believe today, but the life of Julia McWilliams until Pearl Harbor was wholly unremarkable. She wanted to write but collected nothing but rejection notices.  Her initial foray into advertising ended with her being fired from her job.  At 30, she was a tall and lived her life caring for her father, a wealthy Pasadena land owner.

However, the war changed all of that. She joined the staff of “Will Bill” Donovan, the head of the Office of Strategic Services (OSS) and quickly worked her way up the food chain. Within a year, she found herself working for the OSS in South East Asia, helping to build the network of spies who fought the Japanese.  Donovan built an organization of lawyers, Irish Catholics and the wealthy, thinking that would not fall victim to financial blackmail.   END_OF_DOCUMENT_TOKEN_TO_BE_REPLACED 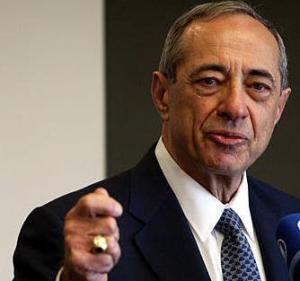 The Luncheon Society sat down for a wonderful gathering with former New York Governor Mario Cuomo in Manhattan.  Thanks to Luncheon Society patron Enzo Viscusi, it took place at The Century Association.  Looking down over the luncheon were portraits of Daniel Patrick Moynihan as well as Louis Auchincloss, both towering New Yorkers born at opposite poles of the society but both ended up at The Century Association.  It was a great afternoon of fun.

Although the conversation was off-the-record, here is classic speech that Governor Cuomo delivered at Notre Dame on September 13, 1984.  In many respects, it is even more prescient than the keynote offered at the 1984 Democratic Convention. It questions whether the “separation between church and state” implies a separation between religion and politics. It is  thoughtful and respectful of all sides. It also underlines Governor Cuomo’s marriage between poetry and prose that marked 12 years in Albany and many more on the national stage.

Thank you very much, Father Hesburgh, Father McBrien, all the distinguished clergy who are present, ladies and gentlemen:

I am very pleased to be at Notre Dame and I feel very much at home, frankly — not just because you have seven or eight hundred students from New York state, not just because — not just because Father McBrien’s mother’s name is Catherine Botticelli — a beautiful name — not just because Father Hesburgh is a Syracuse native, but also because of your magnificent history of great football teams. Oh, the subway — They mean a lot to us, the…great Fighting Irish. The subway alumni of New York City have always been enthralled. And for years and years all over the state, Syracuse north and south, out on Long Island, people on Saturday’s would listen to their radio and now watch their television to watch the great Fighting Irish wearing the Gallic Green. It’s marvelous. The names of your great players reverberate back from the years: Nick Buoniconti, Nick Pietrosante, Angelo Bertelli. How about Ralph Guglielmi? What a great player he is. END_OF_DOCUMENT_TOKEN_TO_BE_REPLACED