The Luncheon Society/Jill Tarter of the SETI Institute on Kepler and the search for Earthlike-Exoplanets/Manhattan—PrimeHouse/March 22, 2012

Have you ever looked up into the night sky and wondered if anybody was listening? What if they were?

We live in a universe where 760 extrasolar planets have been identified and perhaps billions are waiting to be found.  If life has been able to thrive on Earth, logic suggests that it might be plentiful elsewhere throughout the universe. We just have to find it.

We wonder what lies beyond the horizon. When man walked on the moon, we wept with Walter Cronkite and reflected with Eric Sevareid on the meaning of it all; we were no longer tethered to our home planet.  Thanks to a Voyager, Pioneer, and the upcoming New Horizons  spacecraft, we have transformed our knowledge of the outer planets in our own backyard.  But the biggest prize could belong to the plucky little Kepler Space Telescope, which is designed to discover earth-sized planets, far outside of our solar system.  This could be the next generation of Great Discovery.

How many planets might support life? Indeed, what is required for life to exist? How does life start? How does it evolve, and what fabulous creatures can evolution produce? How often do intelligent creatures appear in the giant tapestry of life? Do we even know what life would be like elsewhere? These are the questions being addressed by the scientists at The SETI Institute.

How close are we?  Jill Tarter joined us for The Luncheon Society for a fourth gathering, this time in Manhattan at Prime House, where we had a distinguished group, including Dr. Neil deGrasse Tyson and Dr. Jeremiah P. Ostriker. This luncheon was hosted by our good friend Jim Day, who once again proved to be a wonderful host. 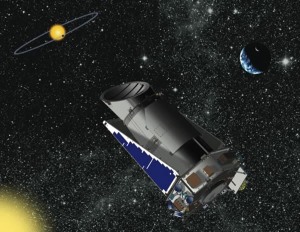 There are more stars than there are grains on sands on all of our beaches. When Jill Tarter made her first presentation before The Luncheon Society in San Francisco back in 2004, there were only 85 extra solar planets. As of March 13, 2012, a total of 760 confirmed exoplanets are listed in the Extrasolar Planets Encyclopedia, including a few that were confirmations of controversial claims from the late 1980s. That count includes 609 planets in planetary systems and 100 planets within multiple planetary systems. A system has been discovered in which a planet orbits around two stars, which orbit around each other. As of February 2012, NASA’s Kepler mission had identified 2,321 unconfirmed planetary candidates associated with 1,790 host stars, based on the first sixteen months of data from the space-based telescope. It’s a veritable gold rush.

While the majority of these planets are gas giants, like Jupiter and Saturn, smaller planets are being discovered on a regular basis. Perhaps some may be teeming with intelligent life and maybe, just maybe there are a few which have the technology to transmit outward, not unlike like what we have on Earth. We are getting closer to one of the major discoveries of our lifetimes.

What are the odds? To understand the potential, let’s have Carl Sagan, one of Jill Tarter’s professors at Cornell, explain The Drake Equation.

Those who may be unfamiliar with Dr. Tarter may know the fictionalized version of her the Robert Zemeckis film “Contact.” In that film Jodie Foster portrays Dr. Ellie Arroway, whose team receives as a scientific message from the constellation Lyra. Her hope that intelligent life can be found out there, far beyond the confines of our solar system, is compelling stuff. Now that science is catching up to our ability to search the heavens in a meaningful fashion, we may have the answer in two decades.

The Quickening Pace.  Understanding the behaviors of exoplanets is an emerging field of study.  The first confirmed exoplanets was a giant gaseous planet that revolved around a pulsar was discovered in 1992, only two decades ago. Since then scientists have figured out how to better capture their existence through  Doppler, Transit, Gravitational micro lensing, and a whole host of other emerging techniques.  Now we are getting to the fun planets, thoxe which are found within the habitable zone and are small enough to have earth-like behaviors. 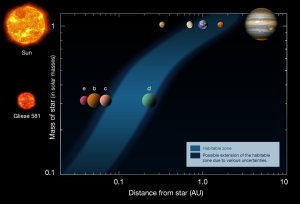 Drilling Deeper into The Habitable Zone.  Every astronomer has his or her own name for that elusive astronomical sweet spot, a rocky planet with organic compounds located not too close—but not too far away—from the central star.  There is liquid water found on the planet’s surface of the planet and perhaps a nearby moon that will stabilize atmospheric and tidal conditions. Some call it “The Goldilocks Equilibrium.”

Had the Earth been placed tens of millions of miles on either side of its current orbit or lacked the current moon, we would consist of little more than simple one-celled microbes and with little chance of upward mobility into a more complex species.

Right now several interesting candidates have bubbled up.  HD 85512 b is a super-earth located at the edge of a habitable zone on Gliese 370 which is found in the constellation Vela. GJ 667Cc is roughly 4 times the size of Earth and is found in the constellation Scorpius.  But the really intersting find is Kepler-22b  which, according to NASA, “became the first known transiting planet to orbit within the habitable zone of a Sun-like star.” This is critical because it suggests that this planet is lined up around the star for a regular orbiting interval.

A Long Distance Relationship.  Let’s say we do find something within Lyra—which not unlike the movie—but it is 25 light years away from Earth.  That means a “hello” and a subsequent response would take a half century to complete; HD 85512 b is an extra pit-stop at 36 light years. GJ 667Cc is 22.1 light years. Some might be more than a country drive into the distance because Kepler 22b is 600 light years away.  That might offer comfort to those who feel that our lives would be instantly transformed into a 1950’s B movie where Frisbee-flying saucers come to cause mischief with humanity.

Microbial Life is Sturdy. The scientific betting suggests that microbial life exists within our solar system.   We have discovered that earth’s microbial life is quite resilient in hostile territory.  After the Apollo 12 astronauts returned with pieces of Surveyor III, an unmanned craft which land soft landed on the moon in 1967 to test potential landing sites.  When it was later studied, researchers were astounded to find a live bacteria on the camera lens, suggesting that it could have survived several years in an airless vacuum because the item was not sterilized before leaving to the moon. While some has suggested that the contaminated took place after the pieces arrived on Earth, we now know that microbes thrive at the deepest depths of our oceans, where light cannot penetrate, and inorganic carbon is transformed into food. Life adapts.

Let’s not forget our own backyard. Thanks to the suite of spacecraft and rovers, we now know that liquid water flowed on ancient Mars.  However, the fact that trace elements of methane are found in the atmosphere, might suggest the aftereffects of something organic decomposing and escaping up into the thin atmosphere. Io and Europa, both moons of Jupiter, may have microbial life within our own neighborhood.

If life is this plentiful in our low-rent suburb of this galaxy, one could only imagine what it’s like throughout the rest of the universe. It’s only a matter of time before we find out because if we are all alone, it would be a terrible waste of space.

The Luncheon Society™ is a series of private luncheons and dinners that take place in San Francisco, Los Angeles, Manhattan, and now Boston. We essentially split the costs of gathering and we meet in groups of 20-25 people. Discussions center on politics, art, science, film, culture, and whatever else is on our mind. Think of us as “Adult Drop in Daycare.” We’ve been around since 1997 and we’re purposely understated. These gatherings takes place around a large table, where you interact with the main guest and conversation becomes end result. There are no rules, very little structure, and the gatherings happen when they happen.