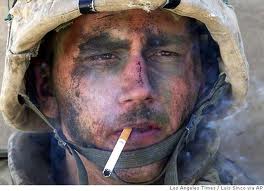 Every so often, I’ll Google James Blake Miller and hope he has risen above his personal demons. He’s largely faded from the public view, but the image of a young and exhausted soldier who took a smoke break after prolonged firefight in Fallujah found itself on the front page of most newspapers and the cover of Time.  Miller, who appeared as an anonymous everyman covered with mud, blood, and exhaustion, became a metaphor for every American in daily combat.

Just as quickly, James Blake Miller became another type of metaphor.  After returning home to his family, it became clear he was suffered from Post-Traumatic Stress Disorder (PTSD) and the subsequent stories chronicled a downward tailspin.  A storybook marriage to his high school sweetheart quickly imploded and there several incidents which later resulted in a medical discharge from the armed forces. Living on disability, he joined a motorcycle club that law enforcement felt was suspicious. When the LA Times photographer who took the iconic photograph intervened to get him admitted into a long-term counseling program for veterans, Miller soon left and was last heard of living alone, a far different person from when he shipped out.

The IAVA’s founder, Paul Rieckhoff, joined The Luncheon Society for his fourth gathering; our last luncheon took place in San Francisco in 2010.  For Manhattan , our old friend and therapist Shari Foos moderated. Rieckhoff, who founded the IAVA when he returned from the theater of operations in 2004 from his apartment in Greenwich Village, is now focused on the next phase of his mission. With the general drawdown in both theaters, combat deaths and injuries will fade to the background to be replaced by The Next Big Story that dominates Basic Cable. The IAVA will have its hands full making sure that the needs of vets do not fall between the cracks.

Their mission is to ensure that every soldier who returns from the combat theater has the tools to reintegrate into civilian society.  Their website states, “IAVA is the country’s first and largest nonprofit, nonpartisan organization for veterans of the wars in Iraq and Afghanistan. With more than 200,000 Member Veterans and civilian supporters nationwide, IAVA is building the next greatest generation with a three-pronged model based on advocacy, awareness, and assistance. IAVA programs empower our community online and offline, and include Smart Job Fairs, our signature New GI Bill calculator and Community of Veterans, a veteran’s only social network.”

What Rieckhoff has done (and done well) has been to prod the usual groups of veteran stakeholders to move faster and act smarter to accelerate veteran outreach.  For physical wounds, soldiers are quickly evacuated and stabilized through a complex ballet of medical professionals, aircraft, and logistics. However, the military still continues to fall short on the mental health front.  Some within the military culture still view acute mental stress as akin to battlefield weakness and soldiers that should get help either evade the screening or fall through the cracks.

Better still, Rieckhoff and the IAVA have goaded the VA into making staff improvements and updated antiquated data management to better care for wounded warriors long after their hospital stays are over. In partnership with The Ad Council, the IAVA launched the “We’ve got your back” campaign, designed to remind vets that somebody understands their challenges and speaks their language upon returning to the home front.

People speak of World War II veterans as The Greatest Generation, but returning vets from that war had something new and different, The GI Bill of Rights.  A generation of veterans bought homes, received college degrees, and elevated themselves upward.  The IAVA played a pivotal lobbying role in the New GI Bill, which transforms the thanks of a grateful nation into something that can help transform our economy.

The IAVA also helped to support The Veteran Jobs Initiative based upon statistics from the Department of Labor that the unemployment rate for Iraqi and Afghanistan vets stood at 12.4%, which is 3% above the national average.

“IAVA is extremely encouraged to see the President stepping up to support new veterans. With over a quarter million Iraq and Afghanistan veterans jobless in June, this is the exact kind of attention our community needs. For months, IAVA has been calling on both the White House and Congressional leaders to make veteran unemployment a top priority in the national dialogue. This initiative is a solid step in the right direction. It will bring critical attention and resources in the fight to lower the 13.3% new veteran unemployment rate in June,” said IAVA Founder and Executive Director Paul Rieckhoff.

Coming home is one of the toughest transitions for those who fought in the heightened emotional space of battlefield combat. Yet for those who move forward and engage in the next chapter of their lives, having the IAVA as an ally may make all of the difference.

But it also underscores a larger point.  Are we as a national becoming too separated from our military? When you add in the family members of those who fought in both wars, it only amounts to 1-2% of the national population.  For the rest of us, all irony aside, support for the soldiers amounted to little more than ribbons glued to our SUVs.  Just as we might be more cautious before we “send in the marines,” we would certianly be far more careful to ensure that a return to civilian life is more seamless.