From Taylor Branch’s vantage point, the shame of the NCAA is that it has grown into a multi-billion-dollar monopoly that benefits everybody except those who play the game.

The sum total of the tickets, jerseys, corporate sponsors, shoe contracts, boosters, luxury boxes, and other souvenirs has made collegiate sports branding in a multi-billion dollar enterprise. Even with the baby steps of reform, the players will get next to nothing. To Branch, the contrast of poverty from those who pay the game against the backdrop of overflowing riches of the universities and the NCAA who acts as the judge, jury, and executioner is overpowering. This premise underscores his latest book, The Cartel: Inside the Rise and Immenent Fall of the NCAA ,  which was serialized in The Atlantic.

Thirty five years ago, nobody could have foreseen the explosion of cable sports and how it funneled a Comstock Lode of money into the NCAA as well as the university sports programs.  According to Taylor Branch, all of that money creates the opportunity for large-scale fraud and nobody should be surprised that this environment has produced scandal after scandal. Cam Newton fell under a cloud because his father allegedly tried to broker a deal that would have his son return to a top-ranked collegiate program. Reggie Bush returned his Heisman Trophy because of an inappropriate relationship with sports boosters who paid his expenses while at USC. Countless coaches have been fined, fired, or had their programs sanctioned due to various violations. As more dollars enter into the fray, the scale of corruption only increases. 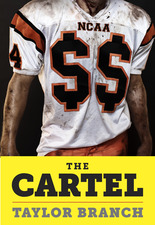 Branch joined The Luncheon Society for his third appearance over the years, this time at Prime House in Manhattan.  We were thankful our friend Steve Schlesinger was able to host the gathering and it was a filmed affair, part of a larger documentary on Taylor’s book.

Taylor Branch is not some disdainful academic who looks down his nose at college athletics. While growing up in the Atlanta area, Taylor Branch was one of the top ranked high school football players in the state and turned down a scholarship to Georgia Tech.  He then ran a post-pattern into academia and has distinguished himself as one of the best historians of his age. END_OF_DOCUMENT_TOKEN_TO_BE_REPLACED