The Luncheon Society-NY/Andrew Blum on “Tubes: A Journey to the center of the Internet.”/Blue Water Grill/2.20.13 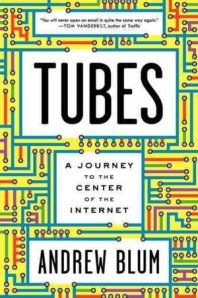 The Luncheon Society kicked off its New York gatherings with Andrew Blum, the author of “Tubes, A Journey to the center of the Internet.”

Last year, I found myself listening to a Terry Gross interview with Andrew and it was a wonderful and enlightening conversation about the mechanics of the internet, something we take for granted but cannot explain how it works.

It just is.   Watch his TED talk on the Internet to get an idea about the platform of “old fashioness” that drives our modern communications.

The title comes from a quote from former Alaska Senator Ted Stevens, who believed that  the internet was comprised of a whole bunch of “tubes.”  While he was ridiculed at the time, Andrew Blum essentially confirms Stevens assessment.  Beneath the internet protocols, the fiber optic relays, and whatever else is down there that nobody understands, he essentially got it right.

Here is the book jacket synopsis:  “When your Internet cable leaves your living room where does it go?

Almost everything about our day-to-day lives—and the broader scheme of human culture—can be found on the Internet. But what is it physically? And where is it really? Our mental map of the network is as blank as the map of the ocean that Columbus carried on his first voyages. The Internet, its material nuts and bolts, is an unexplored territory. Until now.

In Tubes, journalist Andrew Blum goes inside the Internet’s physical infrastructure and flips on the lights, revealing an utterly fresh look at the online world we think we know. It is a shockingly tactile realm of unmarked compounds, populated by a special caste of engineer who pieces together our networks by hand; where glass fibers pulse with light and creaky telegraph buildings, tortuously rewired, become communication hubs once again. From the room in Los Angeles where the Internet first flickered to life to the caverns beneath Manhattan as new fiber-optic cable is buried; from the coast of Portugal, where a ten-thousand-mile undersea cable just two thumbs wide connects Europe and Africa, to the wilds of the Pacific Northwest, where Google, Microsoft, and Facebook have built monumental data centers—Blum chronicles the dramatic story of the Internet’s development, explains how it all works, and takes the first ever in-depth look inside its hidden monuments.

This is a book about real places on the map: their sounds and smells, their storied pasts, their physical details, and the people who live there. For all the talk of the “placelessness” of our digital age, the Internet is as fixed in real, physical spaces as the railroad or telephone. You can map it and touch it, and you can visit it. Is the Internet in fact “a series of tubes” as Ted Stevens, the late senator from Alaska, once famously described it? How can we know the Internet’s possibilities if we don’t know its parts?

Like Tracy Kidder’s classic The Soul of a New Machine or Tom Vanderbilt’s recent bestseller Traffic, Tubes combines on-the-ground reporting and lucid explanation into an engaging, mind-bending narrative to help us understand the physical world that underlies our digital lives.”

I hope you enjoyed learning more about this author and we hope to have him join us soon in other locales.

Bio: Andrew Blum is the author of Tubes: A Journey to the Center of the Internet, the first book-length look at the physical heart of the Internet itself. Tubes was published in 2012 by Ecco/Harpercollins in the US and Viking/Penguin in the UK, with forthcoming translations into German, Spanish, Russian, Chinese, Japanese, Portuguese, Czech and Turkish.

When not immersed in the Internet’s depths, Blum writes about architecture, design, technology, urbanism, art, and travel. Since 1999, his articles and essays have appeared in Wired, The New York Times, The New Yorker, Bloomberg Business Week, Metropolis, Popular Science, Gizmodo, The Atlantic Online, Architectural Record, Slate, and many more publications. He has degrees in literature from Amherst College and in human geography from the University of Toronto, and lives in his native New York City.