As Mexico continues to sink into the hell of its own Narco Terror, Time Magazine’s Ioan Grillo details how things got violent so quickly.

Since 2006, when President Felipe Calderon launched the first concentrated attack against the drug cartels, nearly 40,000 people have been killed and another 90,000 have been wounded. With an annual estimated revenue beyond $30 Billion annually, the cartels have no plans to quiet the violence.

It is hard to believe, but at the dawn of the new century, Mexico was evolving from a one-party semi-democracy to a multi-party state.  Border cities like Juarez and Tijuana were primed to take advantage of the benefits from NAFTA and American brands built factories where low—waged Mexican workers built high-ticket good designed for American tastes.

It should have been a Golden Age for Mexico, but as Grillo notes in his book El Narco ,” Mexico runs the risk of being wholly coopted by the ruthless nature of groups like the Sinaloa Cartel their rivals, the Gulf Cartel, La Familia Michoacana, Los Zetas Cartel, or some other offshoot or reconstituted gang. Now that we are on the eve of the 2012 Mexican national elections, there are enough dead in Mexico to sell-out Dodger Stadium.

Many areas of Mexico are still reasonably safe like the resort areas of Acapulco and New Orleans still has a higher homicide rate than Mexico City.  However, Grillo points out that border cities and rural areas are quickly falling under control of the warring drug cartels.  In less than ten short years, the acceleration of violence calls into question Mexico’s ability to control its own political destiny. While El Paso remains one of the safest cities in the United States, Juarez, only a few miles to the south, has become a bloodbath of endless vendettas.  It has cast a pall over tourism and the best efforts by Mexican PR agencies have not been able to stem the tide. State police patrol the beaches and resorts with submachine guns. Reporters have been brazenly killed or intimidated into silenced. The Narcos, the short hand for the drug-fueled insurgency, represents a fusion of the most ruthless parts of the Russian mafia and al-Qaida. Worse, illicit drugs are only part of their portfolio.  The sad fact remains, as Grillo ruefully points out, things will get far worse before they get any better. 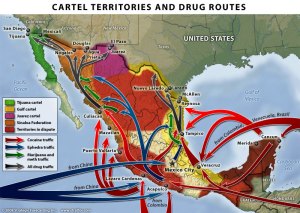 How did we get here? The rise in Mexico’s Narcocracy began a century ago as Chinese immigrants grew poppies in the remote mountainous regions. After it was processed into Opium, it began to show up in Los Angeles.  However, marijuana would become the cash crop for many outlaw areas of Mexico.  Violence was kept to a minimum because the PRI, the main political body in Mexico, tolerated this nascent drug industry so long as it remained at the edges of Mexican society. The 1960’s saw a rise in the American consumption of illicit drugs and by the 1970’s the Columbians monopolized the cocaine market while Mexican growers concentrated on marijuana.

However, in the 1980’s the Drug Enforcement Agency (DEA) began to clamp down on the Bogotá-to-Miami conveyer belt, so the leaders of the Cali and Medellin Cartels used the Mexican overland routes to get their product into American hands. As Pablo Escobar and his ilk were killed by Columbian special strike forces and the powers of their families ebbed, Mexican Crime families picked up the slack, thanks to a preexisting infrastructure and a porous border to the North.

Until 2006, there was a slow rising tide of drug violence in Mexico. By 2004-2005, the Mexican Cartels began to exhibit a militaristic chain of command, complete with former officers of the police and state forces.  As one group sped up its arms race, the other families quickly followed suit. Soon the Narco arms race was in full force, with the majority of the weapons coming from American gun dealers.  The families had much to protect.  A shipment that could net a Columbian farmer $2,000 would have a street value of $150,000 in Los Angeles or San Francisco, New York or Boston.  The financial were far too irresistible for the Narcos to walk away, regardless of the danger involved.

In December 2006, the Mexican Drug War began as President Felipe Calderon sent in Mexican troops to fight the cartels directly.  However, the military and the local police forces have been riddled with corruption.  In fact, the Zetas were started as a paramilitary protection force for the Gulf Cartel and were populated with former military and police officers. Within a short span of time they grew with such ferocity that they formed a deal with The Sinaloa Cartel and turned on their original sponsors. Most shocking were reports that Baja California’s Anti-Kidnapping police team was actually a hit squad, working in close conjunction with the Cartels.  It raises the important question—who can you trust?

The Overarching Power of the Cartels.  The Illicit Drug trade represents a small part of their portfolio as their reach also extends to prostitution, human trafficking, kidnapping, arson, auto theft, extortion, intimidation, assaults, and murder.  Once the cartels set up shop, they will demand a tax from a variety of sources, under the guise of protection money.  This year, teacher protested the lack of their governments to stem the tide of narco violence as they refused to pay their taxes to drug families.

However, they remain active and powerful because there is an unquenchable thirst for these drugs from American consumers.  As drug cartels are destroyed others move into take their place, perhaps something that Calderon’s government failed to comprehend due to the deep roots that these cartels carved into the Mexican national landscape.  As of 2010, Calderon noted that the aim of these Cartels is to replace the Mexican leadership with one that will turn a blind eye to the drug trade.

However, Grillo points out, they do not act alone. Somebody north of the border provides a majority of the weapons cache, somebody provides the banks where funds are laundered on a regular basis, and others look away in state and federal bureaucracies. There are good and honest people who will fight for their country, while others are willing to sell it away for a fraction of its value.

Today, roughly 90% of the cocaine that enters into the United States comes through Mexican drug gangs.  Huge percentages of marijuana come from Mexico and an emerging crystal meth trade is flourishing too.  Worse, Mexican songwriters and balladeers are giving these people folk hero status. Songs by those who croon the narcocorrido, or drug ballads, are themselves falling victims to a hail of bullets.

Recent polls in Mexico suggested something astonishing; 40% of all Mexicans would welcome an American military presence within Mexico to deter El Narco.  A nation which had been invaded against their will on past occasions might now welcome it.  Military planners at the Pentagon are gaming out how a social collapse south of the border would impact domestic security.  However, as pressure is being placed on Mexican drug cartels, new locales are setting up shop to supplant the Narcos, just as they eclipsed the Columbians.  Tomorrow’s globalized drug havens might emerge in places like Guatemala or in the failed state on the African continent.

However, the basic economics of supply and demand will rule the equation with a ruthless efficiency. So long as there is a desire to use these substances (whether legalized or not) their path to American consumers will be steeped in blood, torture, extortion, human trafficking, and death.  Perhaps if Americans understood the true human cost behind what they received in a vial or plastic baggie, they might rethink their vice.  Or perhaps the hold of these drugs is so strong that the carnage incurred offers little meaning to the buzz found in a short term high.

The Luncheon Society ™ is a series of private luncheons and dinners that take place in San Francisco, Los Angeles, Manhattan, and Boston.  We essentially split the costs of gathering and we meet in groups of 20-25 people. Discussions center on politics, art, science, film, culture, and whatever else is on our mind. Think of us as “Adult Drop in Daycare.” We’ve been around since 1997 and we’re purposely understated. These gatherings takes place around a large table, where you interact with the main guest and conversation becomes end result.  There are no rules, very little structure, and the gatherings happen when they happen. Join us when you can.