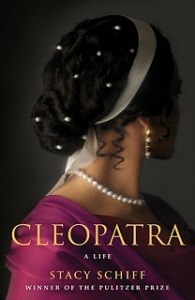 There’s a great movie line that says, “When the legend becomes fact, print the legend.” However, when looking at Cleopatra, her life outpaces any legend.

In contemporary terms, Cleopatra is seen through the refracted lens of Elizabeth Taylor’s Hollywood portrayal.  Bits and pieces were added into the stew throughout the centuries, with generous helpings from Plutarch and William Shakespeare. She wasn’t the classic beauty as seen through modern eyes, but she had the guile and smarts to outmaneuver her enemies and build an empire.  It kept her in power for a generation and launched the persona that remains until this very day.

Unlike many leaders of antiquity, there are no source documents for Cleopatra’s reign or even her life. Only one word from Cleopatra has survived the centuries, “Genesthoi,” which means, “Let it be done.”   The ensuing stories were written by Cleopatra’s enemies during and after her fall written by Romans and were largely fiction. They portrayed her as the libidinous tramp who used her wiles to entrap and weaken the two main leaders of her generation, Julius Caesar and Mark Antony.

“Cleopatra, A Life,” written by Pulitzer Prize Winning author Stacy Schiff, takes us into her world by compiling the source documents of that era to give us the best understanding of her times. Wedged into history three centuries after Alexander the Great but only a generation before the birth of Christ, Schiff constructs an ancient world and examines her life—right up to her death. When the facts present two alternatives, she explores them all in great detail. Did Cleopatra die of an asp bite to the breast or by drinking a cocktail of poison? Is either just another piece of fiction that embellishes the legend but hides the fact? END_OF_DOCUMENT_TOKEN_TO_BE_REPLACED