The Luncheon Society/ The passing of Liz Carpenter. 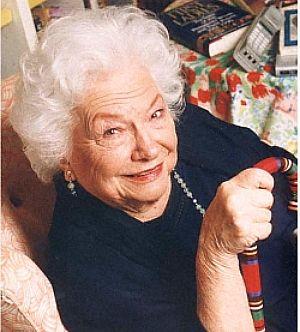 Last week, a wonderful person passed away after a long and rewarding life, both to her family and our nation.  How Liz Carpenter managed to shoehorn roughly six or seven lives into her nine decades remains a mystery, but we are better for it

In 2005, thanks to Liz’s daughter Christy Carpenter and her great friend Martha Whetstone, we were able to have a wonderful Luncheon Society gathering with her in San Francisco. She had just written a book, one of the many she had published over the years, and even though she told stories of the past, she was focused on the future.

Her mobility had been slowed by arthritis and she was now using a scooter to move around.  After we parked the car at a garage in Downtown San Francisco, she asked me if I wanted to ride along with her. I replied there was only room for one, but she convinced me to hop on the back.  So there I was, being escorted to a luncheon, standing on the back of her scooter, surfing our way through lunchtime pedestrian traffic on the sidewalk, and having a blast.

People forget that that behind her Texas humor, she saw some of life tough moments.  She was in Dallas when John Kennedy was assassinated.  When Lyndon Johnson emerged at Andrews Air Force Base and spoke as president for the first time, his first words were written by Liz Carpenter, who by then was serving as the Vice President’s Administrative Assistant, the first woman to hold that role. Those simple words captured the moment with humility and grace. It allowed Johnson to begin to heal the wounds of a nation still stunned by those terrible moments.

Over her long career, she was a journalist, a writer, author, speaker (who was in demand into her late 80’s) and political operator.  She late became the first female Press Secretary to a First Lady. After leaving the White House, with Betty Freidan, Bella Abzug and Gloria Steinem, she helped to create the National Women’s Political Caucus and later served as subcabinet position in the Carter Administrations. She also became a parent to her grandchildren while in her 70’s, something she wrote about in “Unplanned Parenthood.”

While we were cutting and weaving through San Francisco traffic back in 2005, she told me this great story. She was having a dinner party at home with Lady Bird Johnson, who could hear but really could not see anymore, Walter Cronkite, who could see but was going deaf, and herself, who could still see and hear but could not walk too far. Growing old she said, was for the birds, but seeing her morality kept her moving because there was still so much to do.