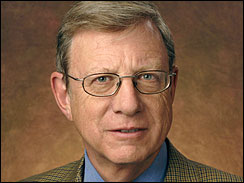 Jeff Greenfield likes to say, “History doesn’t turn on a dime; it turns on a plugged nickel.”  As a veteran political commentator for ABC, CBS, and CNN, Greenfield makes the case that we underplay the role of dumb luck and random chance in current events.

In his new book “Then Everything Changed,”Greenfield builds three very plausible scenarios of how minor shifts could generate far reaching results in American politics.

We tend to look at history from the resultant first and walk backwards to explain events in rational detail; C = A + B. However, the events are so fluid and so ever-changing that a close election could go in several different directions because of movements that take place below the waterline.

Kennedy vs. Nixon; Nixon vs. Kennedy. When we look back to the race between Nixon and Kennedy, the narrative always favors the Massachusetts Senator because he won.  However, a simple trip here or a stumble there and John Kennedy would have returned to the Senate; his narrative would have been “too much, too soon.”

Likewise, President-Elect Franklin D. Roosevelt survived an assassination attempt  in Miami Beach in early 1933, a month prior to taking his oath of office. Had he stood a foot to either side of the microphone while giving an impromptu speech, he would have been shot and killed before delivering his first oath of office. Instead the bullet found its way into Chicago Mayor Anton Cermak’s  chest, who was in town and shaking FDR’s hand. Cermak died en route to the hospital; his last words to FDR were, “I am glad it was me and not you.”  Had FDR died, his Vice President—a very conservative John Nance Garner —would have been a very different leader and would have killed any New Deal legislation. The Great Reforms that built The Greatest Generation would have died stillborn.

More poignant, Jeff Greenfield knew first-hand about Bobby Kennedy’s 1968 presidential campaign because he served as a young staffer in the effort. After a late start, Kennedy got into the game and found himself playing catch-up against the McCarthy campaign as well as Hubert Humphrey, who became Johnson’s heir-apparent after he withdrew.  After a loss in the Oregon Primary, it all came down toCalifornia and both Kennedy and McCarthy barnstormed the state as if they were running for Governor.

All of this took place prior to the time that the Secret Service insisted upon protection for all candidates. Kennedy’s detail consisted of Rafer Johnson, Rosie Greer and several others, none who were true security professionals. Kennedy himself decided against police protection from the LAPD because of the frosty relationship between himself and Mayor Sam Yorty.

However it was Steven Smith, Kennedy’s brother-in-law and husband to his younger sister Jean, who would lead the way through the crowds. He carefully positioned himself in front of the young Senator to ward off any trouble that might lie ahead. That is how it was for the entire campaign, with the exception of one night. As RFK moved through the crowd into the kitchen as The Ambassador Hotel, Smith was not in his usual spot; however, a troubled 24 year old named Sirhan Sirhan was and we know the tragedy that followed.

Three Jumping Off Points.  As the book jacket relates, “History turns on a dime. It is dynamic, not static. A missed meeting, a chance encounter, a different choice of words, and the outcome changes dramatically. Nowhere is this truer than in the field where Jeff Greenfield has spent most of his working life, American politics. In three dramatic narratives, based on memoirs, histories, oral histories, fresh reporting with journalists and key participants, and Greenfield’s own knowledge of the principal players, he shows just how extraordinary those changes would have been.

These things are true:

But what if it had gone the other way? The scenarios thatGreenfield depicts are startlingly realistic, rich in detail, shocking in their projections, but always deeply, remarkably plausible. You will never think about recent American history in the same way again.”

The first and long forgotten assassination attempt on John Kennedy took place years before that November afternoon in Dallas. Richard Paul Pavlick, a disgruntled postal worker from New Hampshire drove his car to the Kennedy home in Palm Beach, Florida with seven sticks of dynamite in is car. His intention was to drive his 1950 Buick into Kennedy, trip the detonator and “save” the nation from a Catholic president. However at the last moment, Jacqueline Kennedy appeared at the door with their youngest son John and Pavlick held off, not wanting to kill the entire family. The Secret Service had no idea that a mortal threat resided under their nose until several days later.

In Greenfield’s book, the rest of the Kennedy family does not appear and Richard Pavlick drives his car into the President-Elect and detonates the explosives.  Lyndon Johnson then moves forward to carefully assume the Presidency in our nation’s darkest hour, in light of reports of voter fraud along the edges from both political camps.  He then calmed a shattered nation, an echo of events post-Dallas. Civil Rights legislation, long bottlenecked by Southern Democrats, becomes law at a far earlier time because Johnson intuitively understood the House and more importantly, the Senate.  For Johnson, the lynchpin for Civil Rights centered on the right to vote because once-excluded African Americans could enter the polling station freely, politicians would move to curry their favor.

However, Johnson came to the presidency with equal helpings of strengths and flaws. What worked in the halls of Congress failed him in international diplomacy. At a diplomatic summit with Khrushchev in Vienna in 1961, LBJ puts the fear of God into the Soviet leader, which would later haunt the President when offensive missiles were discovered in Castro’s Cuba.  Johnson’s inability to confront the Joint Chiefs directly and instead “split the difference” to form a political consensus would wreck his Presidency as well as the world writ large. 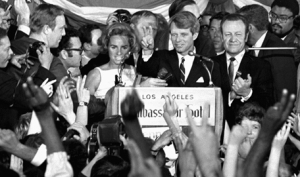 Bobby Kennedy and 1968.  In Greenfield’s alternative prose, Steven Smith is grazed by Sirhan’s bullet but Kennedy remained unharmed.  The updraft from that moment, not unlike the era of good feelings toward Ronald Reagan after his assassination attempt in 1981, is that Chicago Mayor Richard Daley begins to move toward the Kennedy camp.  Recently unearthed memos and oral histories bear this out and Daley had a close personal political and religious connection with the Kennedy family.  Also Chicago’s Merchandise Mart, once the world’s largest building by square footage, was owned by Joe Kennedy and managed by Sargent Shriver.

The picture Greenfield paints is that Bobby Kennedy had a tough road to winning the nomination because the deck was squarely stacked against him. First, he had to vanquish Gene McCarthy and rally the “kids” behind the anti-war movement.  With Daley on board as an establishment figure embracing the anti-war plank, Texas Governor John Connally becomes the ogre of the convention.  Hubert Humphrey bleeds the death of a thousand political cuts, many of them stemming from Marvin Watson, LBJ’s hard-nosed political operative. Lyndon Johnson becomes the King Lear of the fall campaign and on the eve of the Election Day, a very real foreign policy leak (which actually took place) decides the election. The biggest surprise is the emergence of New York Mayor John Lindsay into the political fray.

The Spirit of 76. However, the most fun centers on the third Presidential debate in San Francisco between Jimmy Carter and Gerald Ford.  The incumbent president has been steadily gaining on the Georgia Governor as Democrats began to have second thoughts about the nominee, especially after this infamous Playboy interview. In this case, Ford does not gaffe his answer about Soviet domination in Eastern Europe but catches himself before he uttered the fateful words that blew the election; he says that while the Soviets might have tanks on the ground can never control the hearts of Poles, Romanians, and anybody else in Eastern Europe.

Gerald Ford beats Jimmy Carter thanks to last-minute switches in Ohio and Mississippi. Like Bush in 2000, Ford wins reelection on the strength of his electoral votes, even though he finished 1.5 million votes behind. With that, Ford inherits the challenges that bedeviled Carter, which included creeping inflation and rising gas prices while Ronald Reagan attempts to move the Republican Party further to the right. However, the fun takes place on the Democratic side, where the challenge of redefining the party post-Great Society is accelerated 4 years. Reagan wins the nomination but does not have the benefit of running against a wounded Carter. As 1979 becomes 1980, a Democratic primary battle opens up (not unlike the 2008 race between Hillary Clinton and Barack Obama) with one person we expect against another who is an up-and-coming surprise.

What makes the book fun is the series of winks that takes place throughout. By having the hindsight of history in his back pocket, Greenfield is able to weave a web of plausibility.  We are thankful that Kennedy navigated Americans through the Cuban Missile Crisis by learning from the Bay of Pigs. We are also thankful that it was Lyndon Johnson who carefully navigated three major Civil Rights Bills (Civil Rights Act of 1964, Voting Rights Act of 1965, and the Open Housing Act of 1968). Kennedy and Johnson would have failed had these situations been reversed.

It is also a place rich with irony. A Ford win in 1976 takes the wind out of the sails of The New Right, who came of age in the 1978 midterms.  Instead, inGreenfield’s universe, it’s the Democrats who emerge resurgent, setting the stage for an amazing climax on Election Night 1980. There is also a scene in 1968 where Nixon turns to his young aide Roger Ailes, complaining that he will never get an even break from the networks. Nixon lowers his voice and says, “Maybe someday you can start your own network.” Hmmmm.

However, one wonders what might have happened in 2000 had Al Gore not been hampered by the Cuban repatriation of Elian Gonzalez in Florida, which might have rendered Palm Beach butterfly ballots as an interesting story that added up to nothing.

The Luncheon Society ™ is a series of private luncheons and dinners that take place inSan Francisco, Los Angeles, Manhattan, and now Boston.  We essentially split the costs of gathering and we meet in groups of 20-25 people. Discussions center on politics, art, science, film, culture, and whatever else is on our mind. Think of us as “Adult Drop in Daycare.” We’ve been around since 1997 and we’re purposely understated. These gatherings takes place around a large table, where you interact with the main guest and conversation becomes end result.  There are no rules, very little structure, and the gatherings happen when they happen. Join us when you can.