The Luncheon Society/John Callas, JPL Project Manager for Mars Rovers on Spirit, Opportunity and the Future of Exploration on the Red Planet/Los Angeles-Maria’s/June 26,2011 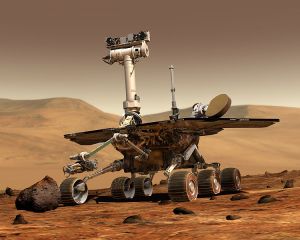 It is the most amazing cell phone; it gives the term “long distance” a whole new meaning.  Each morning, Opportunity the remaining Mars Rover, sends a text to John Callas’s  cell phone that shows its movements during the previous Martian day or “sol.” Even though the two planets are separated by an average distance of 142 million miles and the rover crawls at a speed of 1 cm per minute, it is always good to keep a close eye on your children.

Callas, who has been the Project Manager of the Rovers since 2006, continues to drive breathtaking discoveries on only a shoestring budget. Opportunity and the now-silent Spirit have revolutionized unmanned spacecraft and robotic exploration in ways few could have imagined a decade earlier. It was always understood that man would have to step foot on Mars to be able to grasp its terra firma, but no more. Thanks to these two rovers, we now know that Mars is not the dead rock concluded by both Viking missions in the 1970’s. Not only was Mars alive with oceans of ancient water, but thanks to the subsequent Phoenix lander, samples of the polar ice cap were melted and water vapor appeared; where there is water, there is often life. We also know that the real action surrounding life on Mars might take below the surface, something that only patient and sustained exploration could unearth. 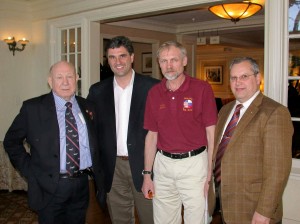 Space flight has long been a fixture of The Luncheon Society. Apollo Astronaut Rusty Schweickart has joined us on several occasions for conversations about Near Earth Objects and in January 2007 brought along Mercury Astronauts Wally Schirra,  Scott Carpenter, and Soviet space pioneer Alexei Leonov, the first man to walk in space. Mission Control head Christopher Kraft talked about the challenges of a manned space flight to the Moon and the herculean challenges to Mars. Former NASA Ames head Scott Hubbard joined us twice, first for a conversation about rebuilding the Mars programs after the failure of the late 1990’s and later with Nobel laureate Doug Osheroff, to help us understand the managerial failures that took place as members of the Columbia Accident Investigation Board  after the shuttle disintegrated in the upper atmosphere. The Principal Scientist of the Mars Rovers, Steven Squyres joined us in San Francisco and most famously  in Los Angeles where Buzz Aldrin, the second man to walk on the moon, sat with us around the table.  A longtime friend of The Luncheon Society, John Callas has joined us at two intervals during the Rover’s time on Mars, first in 2006 and now in July 2011.

Callas said that Spirit and Opportunity are “game changers” because they made all stationery landers obsolete. “Imagine,” Callas noted, “if the first Viking landed at Chryse Planitia and off into the distance beyond the outstretched robotic arm, scientists at JPL could see exposed bedrock, which is the critical roadmap to understanding the Martian past. All they could have done is to pray for better aim.” However, when Opportunity landed and found bedrock only a short drive away, the keys to unlocking the planet’s mysteries were at hand. It led the way with high definition cameras but could also study the geology with a Rock Abrasion Tool (RAT). It represents a quantum leap forward.

Rovers are nothing new.  There are several Soviet-era Rovers on the Moon from the 1960s but when you compare the Lunokhod photographs against the high quality pictures  from the Apollo astronauts on the surface, it does not even come close. However, the big difference today is that NASA or JPL can improve the capabilities of the Martian Rovers with a software upgrade transmitted from earth.  The remaining rover on Mars is actually smarter now than when it landed over 7 ½ years ago.  We are now at a point where the advances in robotic exploration are now prepared to eclipse the potential of manned exploration. If the most lethal planes found today inAfghanistan are predator drones flown by pilots inNevada, why isn’t this true for space exploration?

Space exploration takes time, but great discoveries take patience. Spirit and Rover were launched in 2003 and after a 6 month journey, both landed on the planet designed for a 90 day mission. However, both Rovers showed no signs of stopping and the missions were extended indefinitely.  JPL finally announced the death of Spirit in June of 2011 after it was stuck in soft soil a year earlier and ran failed to respond after the brutal Martian winter.Opportunity is still traveling, perhaps feeling the bones of its old age, but continues to deliver discovery after discovery.

The Allure of Mars.  Mars is far smaller than our own home planet, roughly twice the size of our moon.  It long-held the fascination of scientists but getting there has been difficult and Mars has been littered with failures, both past and present. Unlike the other terrestrial planets, landing a man there is at best, conceivable. The early Russian probes never got beyond earth orbit. Mariner 4 sent back grainy photos of the surface which showed a desolate place and would have disappointed those like Percival Lowell and others, who believed that the “canals” on Mars seen a century earlier suggested signs of intelligent life. This was confirmed again in living color with both Viking landers that Mars had no volcanic activity, a meager magnetic field, and little hope for any life although the door was kept open a crack.

However, NASA announced in 1996 that a meteorite found in Antarctica might offer something tantalizing. The fist-sized rock, ALH84001, was found in during a dig in 1984 and after careful study, scientists concluded the metallurgy came not from this Earth but from Mars.  Something hard hit the Martian surface 17 million years ago, ejected matter into the thin atmosphere and by chance it found its way to the South Pole where it sat for 11,000 years.

However, the Martian rock contained fossilized microbial life and it became front page news. Was it proof of ancient life on Mars or did the fossilized life on Earth contaminate the rock? The scientific community has gone back and forth on the issue, but thanks to the Rover discoveries, the argument appears to be moving back to Martian origin. One prominent scientist believes she has actually pinpointed its original location.

The Tradeoffs between Robotic and Manned Exploration. We all want to see an American flag on Mars; we all want a quote from some future astronaut rival what Neil Armstrong said after stepping off the ladder of Eagle.  However, if getting Man to the Moon required a national effort, getting one to Mars will be far more difficult.  We will have to fund the project, build the rockets, build the life support, feed the crew, and figure out a way to do this within the 26 month Martian launch window—and get the astronauts home safely.

People forget that it took 50 years of mistakes to figure out how to reach the Martian surface successfully. Even though Americans have had success over the past decade, catastrophic failures even like Mars Observer (1992),  Mars Climate Orbiter  (1999), Mars Polar Lander (1999), and Deep Space 2 (1999) demonstrated that Americans are still figuring it out.  Getting Man there might take another 50 years of trial and error.

The upside of robotic exploration is time and technology.  Six crews of Apollo astronauts spent 300 hours on the Moon but only 84 hours exploring the surface. Opportunity, on the other hand, has spent over 7 ½ years or 66,000 hours on Mars performing high science at a bargain price. Before Spirit was terminated, it had spent 52,000 hours roaming its side of the planet. Neither Rover was constrained by finite life support controls, built in series of redundancies to keep astronauts from catastrophic failure, and the political realities of NASA’s budget.  Moreover,  there has been a continuous American presence overhead since 1990’s that has not only mapped the surface, but has begun to peak underneath, where highly acidic water—and perhaps microbial life—is  thought to exist.

The downside is scale.  A manned crew would have accomplished what both Rovers discovered in several weeks. Moreover, the Apollo missions brought back over 800 lbs. of lunar rock which revolutionized our knowledge about the Moon and its relationship to the Earth.  Even though Apollo 17 left the moon in December 1972, the best lunar science is taking place right now. The proposed Mars Sample Return Mission flights may a few yield a few grams of soil.

Will Robotic Exploration supplant Manned Space Travel? Technology has increased to the point where current Rovers and future landers can mimic activities of astronauts on the surface without putting them in harm’s way. Software upgrades will create better, smarter, and more autonomous rovers. Continued miniaturization only accelerates the process and when the signal is lost for the final time, JPL can hold a press conference and announce a cessation of activities without the grieving wives and families of the decreased astronauts who will remain forever entombed on the Martian surface.

However, it may come down to robots and astronauts, not robots vs. astronauts. In the drive to land Man on the Moon, robotic craft paved the way for manned exploration.  Today robotic crafts help manned space flight get the most out of its endeavor.

Importance of Sustained Exploration. While Opportunity continues to explore Endeavor Crater and with Mars Odyssey and Mars Reconnaissance Explorer overhead, The United States will continue its long term exploration of the Red Planet.  Mars Science Laboratory , dubbed Curiosity, which is about the size of a Fiat 500, will launch in November 2011 and will build on the lessons of Sprit and Opportunity. Too large to bounce on the surface with inflatable balloons, Curiosity will be lowered to the surface by a skyhook. Assuming that it lands safely, it would last for two decades, and for The luncheon Society, that means that there will be many luncheons over the next couple of years.

The Luncheon Society ™ is a series of private luncheons and dinners that take place in San Francisco, Los Angeles,Manhattan, and now Boston.  We essentially split the costs of gathering and we meet in groups of 20-25 people. Discussions center on politics, art, science, film, culture, and whatever else is on our mind. Think of us as “Adult Drop in Daycare.” We’ve been around since 1997 and we’re purposely understated. These gatherings takes place around a large table, where you interact with the main guest and conversation becomes end result.  There are no rules, very little structure, and the gatherings happen when they happen. Join us when you can.