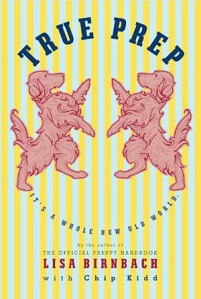 Behind every well-written satire lies a fountain of truth.  In 1980, Lisa Birnbach, then a young feature writer for The Village Voice , found herself working on a project 38 other writers had rejected.

It would be a small book with Workman Publishing, a quirky imprint in Manhattan known more for their calendars and a series of successful “How To” books.  Yet, in the course of ten short weeks, Lisa created what became a field guide for a declining species of an American subculture: preternaturally wealthy WASPS, their tribal customs, behaviors, etiquette, families, and mating rituals. However, as a graduate of Brown and Riverdale Country School , it came as second nature.

When it hit the shelves in October 1980, the initial printing redefined modest. The book cost $4.95 and was sold only in soft cover.  However, 2 ½ million copies and 41 printings later, The Official Preppy Handbook  remained on the New York Times Best-Seller list for 38 weeks. Critics raved and Birnbach demonstrated a sharp eye for social commentary and biting satire. In fact, The Official Preppy Handbook (OPH) remained Workman Publishing’s best-selling title until the “What to Expect When You’re Expecting” series came along in 1984.

For a book that has been out of print for a quarter century it has aged rather well, like those featured within its pages.  Copies can be purchased on eBay for as high as $150 and signed copies (like mine) are sold for as much as $250 to $300.

The gathering provided a well-deserved guilty pleasure for The Luncheon Society. Recent past lunches and dinners dealt with heavy subjects, including the wars in both Afghanistan and Iraq, as well as those who were trying to free the African nation of Cameroon from the grips of political kleptocracy.  We also had a recent dinner in Los Angeles with a former Apollo astronaut to discuss the potential impact of 99942 Apophis, an asteroid the size of a Home Depot, as it veers perilously close to the Planet Earth on (of all days) Friday April 13, 2029. If it hits, it will be a very bad day indeed. Wrapped throughout the past few weeks were three gatherings with crime writer James Ellory, which proved to be both interesting and illuminating.

Lisa Birnbach’s gathering proved to be one of our more intimate lunches, which was a godsend because we had a wonderful flow of conversation that floated around the table.  It also proved to be a reunion of sorts for a couple around the table who attended Riverdale Country School, a private boarding school located in New York where the recollections of teachers past jumped out of the pages of both books. 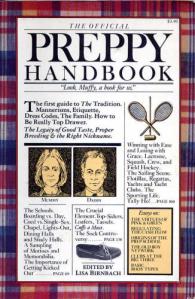 Birnbach wrote the first style book of the 1980’s.  The first book was published long before we entered the worlds of iPads, Facebook, eBay, the internet, email, and even personal computers. She lifted prepdom out of the cloistered boarding school environment and dropped it into mainstream Americana. It even survived a strong undertow when preps were considered larvae for yuppies and became the cinematic shorthand for the snob or jerk in a slew of John Hughes movies.

“The subversive idea behind it,” one of the original contributors recently said, “was if you can reveal all of the secret systems and totems by which a portion of society keeps its elite status, you kind of pull the rug out from under them.”

It also unlocked a demographic profile—and shrewd marketers took notice. The aroma of easy elegance, understated wealth, and a sporty New England sensibility elevated apparel companies like J Crew, Ralph Lauren, Tommy Hilfiger, Banana Republic , and so many others into aspirational brands. Lifestyle retailers like Williams-Sonoma, Crate & Barrel , and others paid attention too. Mail order houses like Lands’ End and L.L. Bean moved out of the shadows as niche retailers and catered to a mass affluent crowd.  Some brands were even resurrected from the dead.  Abercrombie & Fitch, once a mail order companion for anybody who loved hunting, fishing and anything outdoors until the late 1970’s, remerged in the last decade as an apparel brand targeted at teens.

Going prep allowed these brands to remove the guesswork from inventory control because the fashion palate never evolved into new territory. Being a buyer at Lands’ Ends was wholly predictable because next year’s fashion was no different than last year’s choices. How do you update a white buttoned-down oxford shirt? The answer: you don’t.

Case in point. Two decades ago, my neighbor repped for Ralph Lauren and at the end of the season, she had a sample sale. For me, it was a major stroke of luck because everything was in my size.  Not only did I leave with an astonishing haul of clothes, but roughly 80% of what I purchased back then can still be found today, hanging in my closet. In the end, Prep ebbed and flowed but never went out of style.

Its now 30 years later: True Prep: Its a  Whole New Old World. Birnbach felt she had done the subject justice and moved on to greener pastures but she met designer Chip Kidd (who ironically designed many of the front covers for James Ellroy’s novels—the crime writer headlined our next series of luncheons and dinners) who pulled her aside and convinced her that it was time for an update.

Prep changed with the times.  What started as an exclusive birthright soon morphed into an inclusive lifestyle.  Birnbach’s satire is less about the clothes and peerage, but more about manners and poise.

“It’s about ease and confidence.  It’s about fitting in when you do and even when you don’t. It’s about an endless supply of clothes that always look the same, no matter what era or fashion dictates.  It’s about your ability to tell a story, be the fourth—for tennis or bridge—or somehow come to the rescue of a social situation.  Because you can.  Because your parents taught you by example.  Maybe you attended a historic prep school. Maybe you didn’t. Of course it’s better if you did because you’ve been acculturated.  You may protest, but you know some literature, know some history, know some sportsmanship, and know that a tie will do when you cannot find a belt.

And if by chance you are entering this world of your own, of your free will, with no one to lead you by the hand, let us guide you.  We know the code.  We’re here to help.

Who we are? Formerly WASP. Failing that, white and heterosexual.  One day we became curious or bored and wanted to branch out, and before you knew it, we were all mixed up.

Well, that’s the way we like it even if Grandmother did disapprove and didn’t go to the wedding. (Did she ever stop talking about the “barefoot and pregnant” bride?  Ever?)  And now one of our nieces, Mackenzie is a researcher at the CDC in Atlanta is engaged to marry the loveliest man…Rajeem, a pediatrician who went to Duke. And Kelly is at Smith and you know what that means.  Ands our son Cal is married to Rachel and her father, the cantor, married them in a lovely ceremony.  Katie our daughter is a decorative artist living in Philadelphia with Otis, who is a Professor of African American Studies at Swarthmore.  And then there is Bailey, our handsome little nephew. Somehow all he wants to do is ski meet girls, and drink beer.

Well, that’s one out of five.”

But look deeper. Subtract the humor and retract the sly wit and you come away with something that is part Emily Post, part Edith Wharton, and all about how you handle yourself in polite company without looking like a fool. However, her writing delivers the punch:

Meanwhile, back in Rochester. At our house, we were one of those modest suburban aspirants. However, when my paternal grandmother came to the United States 90 years ago, she spent her first years managing the households of wealthy families in Upstate New York—people who made their fortunes at places like Eastman Kodak or Bausch & Lomb. She was very careful to observe. She learned how people behaved and then imparted these lessons on my father and my aunt, who in turn, passed them on to their children.

Behavior, manners, and etiquette were instilled upon us like a blow torch and they still reap benefits today. “Thank you notes” became de rigueur at an early age; there were many occasions where my parents would simply hand me a blank card and instruct me to try again because my penmanship resembled an EKG reading after a heavy workout. There was also hell to pay if holiday “thank you notes” from my cousins and other family members arrived before ours were mailed.

My grandmother’s lessons were passed down through to her children. As we flourished, each generation passed them on to the next, which continues today.  Our daughter, who from my wife’s side is the beneficiary of one of these sprawling families with storied origins and host freewheeling holiday dinners, now writes thank you notes as we did as children. The holiday card list grows like a big ball of string that gets larger with each passing year even as my penmanship plummets to new levels of illegibility.

Like old saying from football, “When you score a touchdown, make it look like you’ve been there before.” Perhaps in these times of yelling and screaming, modesty has a place.  Perhaps being understated is a gift and not bragging about the number of suburban merit badges you own is a sign of maturity. It has worked in generations past; so shall it be in the future.

Finally, Germaine Greer fights the Pink.  When Germaine Greer joined The Luncheon Society at in San Francisco awhile back, she took our friend in Carol Jesmore to task because she was wearing pink to lunch.  Greer, no slouch in the debate department, could not understand the appeal of the color and was horrified to learn that her younger nieces loved the hue.   She could not believe that after all of her agitation, she was undercut by what she considered “a disempowering feminine color.” Well, when we sat down with Lisa Birnbach, Carol Jesmore wore pink and green, proudly.

And yes, I met my wife on a thank you note. 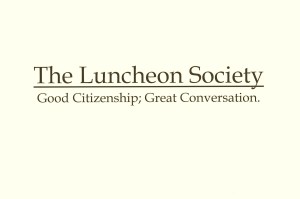 The Luncheon Society ™ is a series of private luncheons and dinners that take place in San Francisco, Los Angeles, and Manhattan.  We essentially split the costs of gathering and we meet in groups of 20-25 people. Discussions center on politics, art, science, film, culture, and whatever else is on our mind. Think of us as “Adult Drop in Daycare.” We’ve been around since 1997 and we’re purposely understated. These gatherings takes place around a large table, where you interact with the main guest and conversation becomes end result.  There are no rules, very little structure, and the gatherings happen when they happen. Join us when you can.