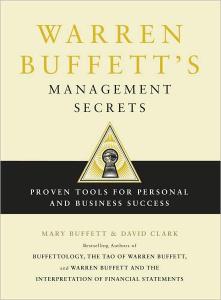 Whenever Warren Buffett speaks at an event, somebody in the audience usually asks for a stock tip.  Buffett will pause, only to reply, “Please forgive me, I really don’t follow the stock market.”

The house will convulse in laughter, as it always does when the questions is posed. On the surface, it might appear odd or even counterintuitive that one of the world’s richest investors does not follow the stock market. However, what Buffett does—and does so well—is that he researches the company’s revenue picture and more importantly, searches for organizations that offers a durable competitive advantage for the long term.

It was a pleasure to have Mary Buffett , an old friend, join The Luncheon Society for a conversation on how Warren Buffett’s investment mind works. Mary, along with co-author David Clark have created a series of books under the banner of Buffettology, to help investors better understand how he grew Berkshire Hathaway into the investment powerhouse that it is today.

Mary’s latest best-selling book is “Warren Buffett’s Management Secrets: Proven Tools for Personal and Business Success,” which has had a smashing run on the business best seller lists and her books have been translated into 17 languages and published internationally by over a dozen publishing houses.   The question they ask is this: Can Warren Buffett’s decision-making offer a keyhole into how he makes his investment choices.  The answer is “yes.”

It is fair to say that Mary Buffett has lived an interesting life.  At a young age, she found herself working in the music industry alongside a variety of people including Phil Spector. Later, she served as the Managing Director at Playboy/After Dark Records and managed Hef’s music businesses. She later co-founded a post-production company called Independent Sound, which provided musical content for a wide range of clients, including a wide variety of commercials as well as motion pictures, like “Dancing with Wolves.”

When Mary met and later married Peter Buffett, she learned the nuts and bolts of how Buffett invested at close range. She recalled that on every Christmas Eve, Buffett always waited to see how See’s Candy did with their holiday business, knowing that sales were heavily weighted around Christmas gift giving.

When they divorced 12 years later, the publishing industry, along with a comet’s tail of agents and editors, pursued her to write a damaging tell all about the family.  However, Mary chose another track.  Instead of writing something that would be damaging to those she admired, she enlisted family friend David Clark to articulate why Buffett’s strategies, which might seen counterintuitive at first glance, really offer the right perspective when investing for the long term.

Buffett’s philosophies can be boiled down into three buckets.

The Discipline of Patience.  When Forbes.com asked Mary the most important lesson she learned from Warren, she replied, “Patience and discipline. And doing something you love. So many people — and Warren has said this — are doing it for the money. That’s really not the right reason. If you’re doing something you love, you’re more likely to put your all into it, and that generally equates to making money. He always says when he gets up in the morning he goes to his pleasure dome, which is his office.”

Mary noted Warren Buffett was disciplined enough to sit and wait for the right moment. He might wait for years. Between 1968 and 1973, Buffett made few moves in the stock market because he felt that the market was overpriced.  However, when stocks fell during the 1973-1974 recession, he made several moves that created strong returns.  Mary humorously pointed out that when Warren purchased the Dairy Queen, it was something he probably wanted to do since the age of 5 but the price wasn’t right.

Buffett would always tell Mary, “you need to remove any shred of emotion when you invest. You have to be rational and understand that the numbers tell a tale of their own.” So many people get caught up in the 11th hour of a bubble, mary noted, only to realize that their portfolio can take a hit at the prick of a pin.

The Search for the Durable Competitive advantage. In the preface to her first book Buffettology, she wrote “Warren had little use for typical Wall Street banter. He didn’t seem to care which way the Dow Jones Industrial Average went, and he certainly had no use for all the soothsayers and their predictions. In fact, he acted as if the entire stock market didn’t exist. He never looked at a chart, and if anyone tried to give him a stock tip, he would usually shut him or her off… He seemed to care only about the individual businesses he was interested in owning.”

Companies like American Express, Coca Cola, See’s Candy, Diary Queen, Wrigleys, BNSF, Gillette and Wells Fargo are organizations that leverage the Durable Competitive Advantage.  Their brads are so powerful that the can drive their marketspace.  Coca Cola can raise their prices by 10% tomorrow without as much as a dent on their overall sales.

These are companies that do not have to reinvent themselves every four years, or in the case of the automotive industry, each and every year. Coca-Cola can create new brands of drinks but in the end, their anchor product has been the same as it has been for over a decade, sugar and water. In fact, when Coke tried to upgrade its formula, it became one of the most famous corporate flops in American history, New Coke.

Buffett learned something else early on.  In the early 1960’s the Salad Oil Scandal ensnared a number of companies, among them American Express. At that point, the CEO of a salad oil company discovered that he could get credit by using his inventory as collateral. However, in reality the ships were filled with little more than water and in short course, the house of cards collapsed.  While American Express tock fell by 50%, people were still using their American Express cards to pay their dinner tabs. The numbers were unchanged. The power of the brand inoculated American Express with little more than a short term stock loss and they quickly rebounded. Buffet noticed and soon owned 5% of the company.

Sometimes companies can lose that advantage. Eastman Kodak retained the advantage even after people stopped buying their cameras because they still bought the film in the yellow box.  However, that advantage evaporated when people moved to a digital format.  Eastman Kodak, even though they invented digital photography, did not have a cogent plan in place and today it is shell of its former self.

A Cogent Understanding of a Company’s Balance Sheet. Mary notes that those want to think like Warren Buffett must invest for the long haul. Those who try to carefully time their entry and exit into the marketplace often end up singled or worse.  Mary will tell you that Warren looks at his participation in a company in terms of decades, not months or years.

What does Warren Buffett look for?

As a result, Mary notes that Buffett will steer clear of most high tech investments. The same could be said for the automotive industry, which took it hard don the chin during the panic and downturn of 2008-2009.  However, people will still drink Coke in good times or bad. They certainly need to shave and Gillette is the brand of default for most Americans.

The Personality behind the Investor. Omaha is not the center of the financial universe but remains hundred of miles from lower Manhattan.  However, a large part of Buffett’s appeals extends beyond his bottom line and travels to the quirk and traits of his own personality.  He still lives in a house he purchased in 1970.  He drives an anonymous car.  He comes across with little ego, the furthest from being a shark.

A couple of years ago, I made a presentation to the CFO of Berkshire Hathaway when I worked for The Large Market Travel Group at American Express.  We wanted to streamline travel issues for annual shareholder meeting that Berkshire Hathaway since it had expanded into the “Woodstock of Capitalism.” As my partner and I walked into the downtown office building, we noticed a large bust in the foyer.  Expecting it to be that of Buffett, we were surprised to see a statue of Peter Kiewit, who founded, who founded Peter Kiewit and Sons, a multi billion dollar construction group.

Berkshire Hathaway is located in the Kiewit Building and its headquarters were as anonymous as a dentist’s office. As we prepared for our meeting, my presenting partner turned a corner and crashed into Warren Buffett, and pages of our PowerPoint deck flew everywhere.  Gracious, he helped to rearrange things, and as I looked at him, he had the persona of a tenured English professor who was enjoying a victory lap before retirement. However, we know this is the furthest from reality.

At some point, we exit the scene; we are all mortal.  The billon question will be, “Who will pick up the torch?”  Time will tell but until that moment comes, we will watch and learn through Mary Buffet’s work.

The Luncheon Society™ is a series of private luncheons and dinners that take place in San Francisco, Los Angeles, Manhattan, and now Boston. We essentially split the costs of gathering and we meet in groups of 20-25 people. Discussions center on politics, art, science, film, culture, and whatever else is on our mind. Think of us as “Adult Drop in Daycare.” We’ve been around since 1997 and we’re purposely understated. These gatherings takes place around a large table, where you interact with the main guest and conversation becomes end result. There are no rules, very little structure, and the gatherings happen when they happen. Join us when you can.